The Reason Behind My Poor Mental Health Recently 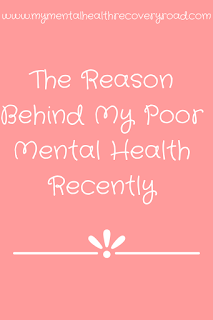 My mental health has been awful recently, I’ve taken a complete turn and feel absolutely awful. In fact part of me doesn’t even want to blog anymore, I feel so unimportant to the world. I’ve been struggling really bad with medication withdrawal from taking duloxetine.

I started a job Monday for it to last 5 hours and then having my break in my car and having a complete breakdown about how unhappy I was with working there. I drove off and left and didn’t return. I could tell that place was going to be hell for my mental health.

I started mirtazapine, massive mistake. Worst 24 hours of my life after taking one small tablet, what a massive affect it had on me. I slept for about 16 of those hours and spent at least 4 hues eating, high carbs and sugary food to keep me awake. Unfortunately that wasn’t the affect it had. It was like I was a zombie in all honesty. So no more of them tablets for me!

I decided to speak to the crisis team Thursday night ( Friday morning ) I explained how much it distressed my at how sleepy I was on just one tablet of mirtazapine. We spoke for half an hour and I actually felt a lot better about everything. So lucky to have had someone nice speak to me, sometimes the crisis team can be very hit and miss.

Friday I spoke to the mental health team, they’ve cleared up all my confusion about what is going on with therapy and everything else. I’ve been referred to the recovery team which is secondary care. I’m hoping it’s going to be a good thing as it’ll mean I’ll have longer term support. As for the mirtazapine they’re going to let me know what to do. Although they said it’s most likely they’ll increase it as the higher the dose the less sedative it makes you.

I’ve got an interview for a job soon and I’m super excited, just hope I get it!

I tried the 30mg of mirtazapine although not sedative, I was still extremely dazed and agitated it made me extremely tearful. I’ve decided to give up with mirtazapine it clearly is going to make me worse.

Self Care Self care is so important yet can be so neglected at times as it is hard to recognise your own self neglect. I am writi...